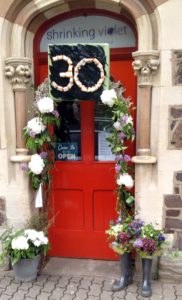 In May this year business owners in Great Malvern, Malvern Link and Barnards Green took part in the Great Malvern Floral Festival. The event is in its seventh year and runs in alliance with the Spring Garden Show held annually at the Three Counties Showground.

The show is extremely well attended and attracting over 90,000 people this year. Many visitors explore our beautiful town so it presents a fantastic opportunity for us to really show off some of the fantastic floral window displays.

This year the competition theme was ‘Celebrating 30 Great Years of the Royal Horticultural Society Malvern Spring Festival’ and entries were judged by RHS standards.

Shrinking Violet was delighted to be commended in the festival for our display featuring the number 30 made out of…. yes, you guessed it…train tickets!

Also in May we joined in with the annual well dressing event organised by the Malvern Spa Association. The tradition’s roots have been traced as far back as the 12th and 13th centuries when Holly Well was annually dressed in August as thanks for the water cures believed to be gifted by St Oswald via the well. 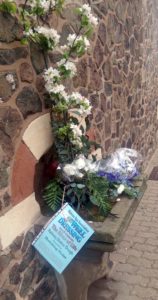 The tradition has continued through the centuries in various forms and has grown in popularity more recently with a total of 42 springs, wells and water features around town being decorated in time for judging on May 1st. This year the theme was ‘River of Life’ and Shrinking Violet’s decorated well at Great Malvern train station was pictured in the Malvern Gazette.

The public were invited to choose their favourite dressed well and Holly Mount Church won overall for their elaborate decoration of the Rose Gully water feature at Waitrose.

Of course this isn’t the first time we’ve been acknowledged for our displays.