Getting creative with railway tickets

One of the aspects I love about floristry is that I can see the value in almost everything around me. So, it was only a matter of time before I started upcycling the railway tickets that are so commonplace at Great Malvern Station. Here are some of the fun results. 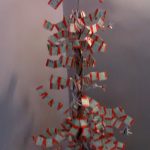 The ticket office needed a new Christmas tree last year so I volunteered to make one out of used train tickets which are collected in the ticket office. The  tree took a few hours to make and included hanging tree decorations such as angels, small presents and tiny crackers. Commuters and day trippers alike were delighted to see how their old tickets had been put to use! Sadly, this picture was taken after the tree had been blown over by a gust of winter wind so it’s a little bent out of shape and missing a few tickets….more like the tree just before we have to take all the decorations down! 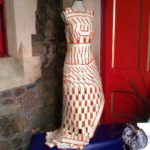 After creating the Christmas Ticket Tree I was left with a bag of used tickets and hated the idea of throwing them away. Then, an idea came to mind, I would design a ticket dress! Taking my inspiration from only the most exclusive catwalks I  decided to create something full length with trailing material over to one side. The dress took longer than the tree to make but once I got started it slowly took shape and I was pleased with the final result showing tickets used as though they were material. 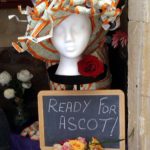 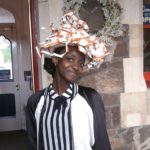 A hat for Ascot

Now I had well and truly been bitten by the bug! With the Ascot races approaching I decided to make a hat suitable for the racing and fashion event of the year! The hat was much harder to make than the dress and took many, many hours but yet again it has brought much pleasure to many people that visit Great Malvern Station. One group of visitors loved the hat, they asked to try it on and here is one of the models, the hat looks wonderful on her and was delighted to hear that she would be on my website to exhibit the used train ticket hat made for Ascot.